Benjamin Preston Baskin was born July 3, 1835 in Addison, New York. He married Ester (Esther) Malinda Rutherford on July 12, 1857 in La Pere (Lapeer), Michigan by Justice of the Peace, James Abbot. Shortly after their marriage they left Michigan and were living in Pennsylvania with their first two children when the Civil War erupted.

Baskin enlisted on August 19, 1861 in Tionesta, Pennsylvania. His Company (Company G) was formed at Erie, Pennsylvania on September 13, 1861. The entire 83rd Pennsylvania Regiment, including Company G moved to Washington, D.C. September 18-20, 1861. The Regiment stayed there the first 6 months, defending the City. The Regiment was in the siege of Yorktown April 5 to May 4, 1862 and, by the Battle of Bull Run on August 30, 1862, Benjamin Baskin was in the Ambulance Corpse. He remained in the Ambulance Corpse, sometimes as a Nurse and sometimes as Ambulance Driver for the rest of his service. Ambulances, of course, in the Civil War consisted of a horse drawn wagon.

There is a statue of Colonel Strong Vincent, Commander of Preston’s Brigade, on the site of that battle at Gettysburg. Vincent died of gunshot wounds received here. The Regiment joined in the pursuit of Lee July 5-24. Then, for a year, they were in many campaigns and battles including Battles of the Wilderness and the Siege of Petersburg. His Company probably returned to Tionesta in September, 1864 after its three years of service but Benjamin Baskin reenlisted and was then assigned to Company E of the same Regiment and still assigned to the Ambulance Corpse. The Regiment was to witness the surrender of General Lee at Appomattox, Virginia on April 9, 1865.

After this which ended the Civil War, his Company with the entire Regiment marched to Washington, D.C. May 2-12, 1865 and participated in the Grand March. They then marched to Harrisburg, Pennsylvania to be “mustered out” (discharged) on July 4, 1865. During their service, the 83rd Pennsylvania Regiment lost 11 officers, 271 enlisted men by mortal wounds and 2 officers and 151 enlisted men by disease – a total of 435. Benjamin Baskin then went back home and later received 160 acres in Midland County, Michigan under the Homestead Act. Baskin died there in 1884, leaving his wife with several children, the youngest not even being school age! 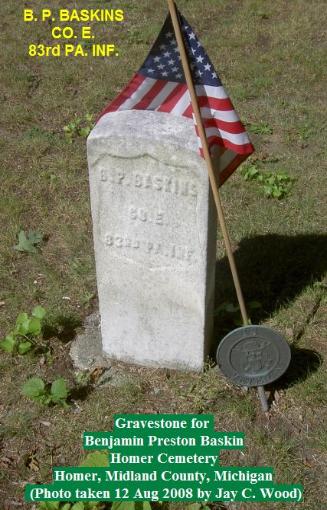