In 1860, Ohio born Avery Lewis Waller was thirty-three years old according to the 1860 US Federal census, and he was living in Zanesville, Muskingum County Ohio, with his wife, Rachel Mary (Francis) and their five children: Lewis K., Isadorah, Dudley A., Anna B., and Lucie H. He and Rachel Mary Francis were married March 26, 1851, in Muskingum County, Ohio.

The 78th Ohio Infantry Regiment was organized in Zanesville, Ohio, from October, 1861 into January, 1862. It was mustered in January 11, 1862. Company F was raised in Muskingum and Guernsey counties and was organized December 25, 1861, with A. L. Waller appointed Captain, Hugh Dunne, First Lieutenant, and James T. Story, Second Lieutenant. In February, 1862, the 78th was sent to Fort Donelson, Tennessee, where the regiment tended to Confederate prisoners and guarded supplies for the North. The 78th was at the Battle of Shiloh, April 6-7, 1862, and subsequently participated in numerous military actions in Tennessee, Mississippi, and Louisiana.
A report dated, “CLINTON, MISS., July 17, 1863” and signed by G. F. Wiles, Lieutenant Colonel, commanding the 78th Ohio Volunteer Infantry describes an enemy encounter on July 16, 1863, and concludes with “I wish to make honorable mention, for your consideration, of Captain Waller, Captain Munson, and Lieutenant Stewart; also of Private (Abiram) Johnson of Company F, who behaved in a gallant manner at the picket line when we captured their advance.”

The military service record for A. L. Waller indicates that he was promoted to a Full Major (not mustered) on December 21, 1864; mustered out on December 31, 1864 at the end of his three-year term of service. He declined promotion to a full Lieutenant Colonel on January 11, 1865.
The 1870 US Federal census records have A. L. Waller living in Zanesville with his family and employed as a “clerk for the government.” He died April 22, 1871. He is buried in Congressional Cemetery, a private cemetery in Washington, D.C., which is still open for burials in the year 2015. His widow, Rachel Mary (Francis) Waller married Jacob Diebold/Deibold in 1875. She applied for A. L. Waller’s pension January 6, 1890. She died December 25, 1914 in Muskingum County, Ohio. Mary Francis Diebold is buried near the grave of her father, Sebastian E. Francis, in Greenwood Cemetery, Zanesville, Muskingum County, Ohio.
A 78th Ohio Infantry monument stands at the Vicksburg National Military Park, Vicksburg, Mississippi. 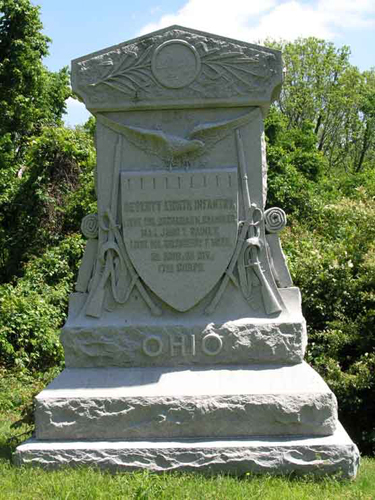