Charles Sturgess was born in Knox, Albany County, NY in 1846. He was the eldest of 10 children born to his parents, David and Melinda (Swan) Sturgess. Charles and his family are found in the 1850 and 1860 census reports living In the Knox area; his father is listed as a carpenter/sawyer. He graduated from Knoxville Academy and remained on the family farm until his enlistment. Knox is a rural farm community to this day about 20 minutes from downtown Albany.

Charles enlisted as a private on July 28, 1862 at the age of 16 (though his paperwork states his age as 18) for a period of 3 years. His father, David, signed the consent for a minor also stating Charles’ age as 18. (Also in this unit were two of his future brothers-in-law-one was killed and the other wounded). He was mustered in on August 18, 1862 in Albany, NY and left immediately with his unit for Washington, DC. His unit was on garrison duty in Washington until May 15, 1864. They then left DC to reinforce the Army of the Potomac eventually joining Barlow’s Division of the Second Corp. At Spottsylvania, they saw their first combat and for the next 100 days had non-stop action. They participated in the Battles of the Wilderness, Fredericksburgh, North Anna River, Totopotomy, Cold Harbor and Petersburg. Charles was captured at Deep Bottom, VA on July 30, 1864 and imprisoned at Belle Island, Libby and Andersonville prisons.

He was paroled on October 8, 1864 and admitted to St. John’s Hospital in Annapolis, MD with typhoid fever. He states on an invalid pension that he remembers little during this time period and “was not himself”, losing all mental powers. When his mental powers returned he noticed that his eyesight was poor, with the left eye almost blind. He was returned to his regiment in Baltimore and was promoted to Full Corporal on May 29, 1865. He developed severe lung hemorrhages and was mustered out on June 17, 1865 in Baltimore, MD. At this time, his regiment was beginning the muster out process with a small regiment left at Fort McHenry, in Baltimore. The 7th Regiment, ranked third in total deaths in battle, fourth in the most battle deaths in a single engagement, fifth in total overall deaths from all causes and third in total deaths in enemy prisons.

Charles returned to the family farm in Knox, NY and married Nancy Quay on December 31, 1868. They had 6 children- Lewis (my great-grandfather), Roscoe, Ada, Lottie, Bertha and Edith. Charles mainly worked as a farmer but is also noted in the local paper in 1890 and 1892 as a census enumerator; in 1891, as a professor at the local one room school house; and in 1894, as he retired as the justice of the peace, after serving 10 years. He also served as school commissioner for three years.

An invalid pension was initially filed in April 1885, stating that Charles suffered a disease of the eyes and weak lungs. He stated on the pension application that he contracted a disease of the throat and lungs, the result of typhoid fever and exposure in the Confederate prison at Belle Island and Libby prisons in Richmond, VA. On his 1890 application, he states that his vision prior to the war was perfect and he was an excellent marksman and he stood third in his unit in target practice.

Charles was a member of the Michael H. Barckley Post 198 of Altamont, NY. He signed the application for charter on January 24, 1881 and served as it’s chaplain until his death.

He died June 18, 1904 in Knox at the age of 58. His obituary appeared on the front page of the local paper, with the following opening and closing lines, “One by one the Boys in Blue are answering the last roll call, and but few are left who have not responded. Mr. Charles E. Sturgess, a well-known citizen of the town of Knox, who has responded “aye”…Yes, the Boys in Blue are passing away, but their memory will be cherished by a grateful nation.”

His wife, Nancy filed for his Civil War pension on July 2, 1904, with further documentation provided through June 20, 1905. Nancy lived until July 4, 1911. Both Charles and Nancy are buried in Knox Cemetery in Knox, NY sharing a monument with Charles’ parents and several of his siblings and surrounded by their large, loving extended family. 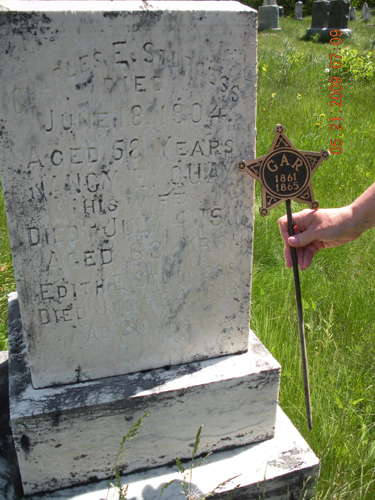