Daniel Wesley Robertson was born May 14, 1844, in Henry County, Tennessee, to James Robertson and Eleanor (Nellie) Neese, both natives of North Carolina. Shortly after his birth, the family moved to Missouri; his early years were spent working on the family farm and attending country schools.

On July 7, 1864, in Marshfield, Missouri, he married Martha Ann (Mattie) Shackelford, whose father, Garland Shackelford, is recognized elsewhere on this Honor Roll. There were eleven children born to this Robertson family: eight sons and three daughters, all born in Webster County, Missouri.

In 1862, he enlisted in Company D, 16th Missouri Cavalry. He served nearly three years. He received a gunshot wound in his right arm at Boonville, Missouri, and was mustered out of service, as a sergeant, in June, 1865. He was a charter member of GAR Marshfield Post 225, serving as Commander in 1886.

He always sought ways to improve everyday life, and environmentally he was ahead of his time. He was a Democrat, a member of the Immigration Society, a member of the Masonic Webster Lodge #98 for forty-three years, and a member of the school board for twenty-five years. He belonged to the Methodist-Episcopal Church, South and was on the Board of Trustees as early as 1881. He served as Mayor of Marshfield, Missouri.

He died in Marshfield on June 13, 1909, at age sixty-five. The Springfield, Missouri, “Republican” newspaper reported on the front page of the Tuesday, June 15, 1909, issue that Marshfield Mayor Jeff James, in respect for the deceased, had issued a proclamation: “All business in Marshfield will be suspended this afternoon from 2 o’clock until 3 while the funeral of D. W. Robertson, one of the city’s pioneers is being held.” D. W. and Martha A. (Mattie) Robertson are buried in the Old Part of the Marshfield Cemetery in Marshfield, Webster County, Missouri. 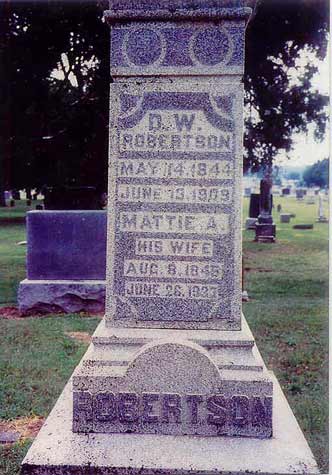